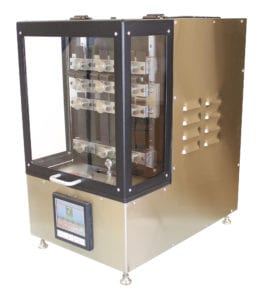 The DeMattia’s lower mechanism is constructed from stainless steel and other alloys that resist the negative effects of fluids and liquids. The immersion media may be fluids (air at ambient, elevated or subnormal temperatures) or liquids such as oils, fuels, solvents, or other various volatile and non—volatile liquids as described in ASTM D471 “Standard Test Method for Rubber Property — Effects of Liquids.”

The DeMattia Flex Tester incorporates a quality self—contained electric motor which provides from 60 to 300 cycles per minute at with an adjustable stroke of 0 to 60 mm. The clamping mechanism is adjustable to induce varying amounts of stress of up to 12 test specimens. The range of adjustment of the cycles, stroke, and stress allow nonstandard specimens to be tested.

The instrument is equipped with a polyacrylic enclosure to greatly reduce the effects of the surrounding environment, when used as a bench top instrument. The enclosure also features a positive interlock mechanism to prevent unintentional disturbance during the testing cycle.

•  Resistant to negative effects of fluids or liquids

•  Can handle up to 12 test specimens

•  Polycarbonate enclosure to greatly reduce the affects of the surrounding environment

•  Manufactured in the USA by CCSi